BTCA Board of Directors

To send an email to the entire board use this link: BTCABoard+owner@groups.io 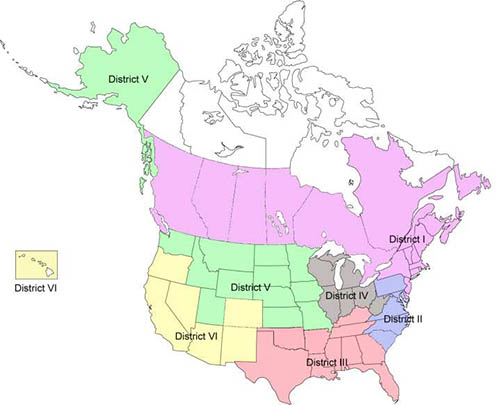 Per the BTCA By-Laws Article IV, Section 4:
(e) The six areas represented by a Director on the Board shall represent six cohesive geographical areas which are as
equal as possible in terms of residence of members in good standing. In arriving at these areas no state shall be divided
geographically. Every five years the Board of Directors shall recalculate and reorganize these six areas to insure that
they are approximately equal to one another in the number of Club members residing within each area.

The BTCA Vice President will work with the Database Manager to gather membership data and will bring the
redistricting plan before the board at the annual meeting in the appropriate years. The membership database will
consist of current voting members, including any members voted in during the period between membership renewal
and the annual board meeting. Junior members will not be counted in the total.

Hawaii and Alaska will be added to District V or VI.